Though I was not yet familiar with these princesses of Provence, what a delightful introduction I received in this novel. Perhaps the most endearing aspect of the book is the way in which author Sophie Perinot tenderly reveals the lives of sister queens

Marguerite and Eleanor through their relationship with each other. Perinot employs the use of correspondence between the sisters to cue the reader to a change in point of view and to draw parallel timelines throughout the book. In this way, she also shows us the strong bond that ties these women to each other, despite the great distance and many years that separate them.

This device also helps to reinforce the individual voices of each of the sisters, which in my humble opinion, were not quite strong or distinct enough on their own to keep me from confusing one with the other throughout the story. This is a minor distraction, however, as the heart of the story lies in the natures of these women – intelligent, educated, sophisticated beauties – as their lives unfold on the pages, from daughter, to sister, to wife, to mother, and as leader. As portrayed in THE SISTER QUEENS, each of these women wielded great influence in their respective lands, despite the constraints of the customs of the day. As they say, behind every great man is a woman.

Most appealing to me is the loving relationship the author has drawn between Henry and Eleanor, in which the younger sister is allowed to employ her intelligence and given the opportunity to make significant contributions not only to her husband’s success, but to the betterment of the country he rules. Though both women must come to terms with the realities and limitations of their marriages, Eleanor at least finds some measure of happiness and satisfaction through partnership.

Oppositely, Marguerite’s empty marriage and her long-suffering pursuit of her husband’s affection is heart-rending. Perinot’s portrayal of Louis IX is less than romantic, albeit honest, and Marguerite is cast as a woman so desperate to be valued she curries a dangerous liasion. While fun to read, the detailed sexual encounters between the Queen and her lover seem almost out of place in this novel. The affair is in conflict with Marguerite’s core values, which seems to be much more troublesome for her lover than it is for her. The author’s premise of the affair is indeed plausible given the historical record, and it is certainly fun to entertain. Unfortunately, Marguerite’s character, as she is written in the early chapters, seems to devolve rather than evolve. While some readers will find her sympathetic and her behavior understandable (even laudable), others may find that she grows less appealing as the story progresses, rather than more. This is a risky choice by the author, but certainly opens the door to great book club discussions!

Overall, THE SISTER QUEENS is a rich and detailed account of two of history’s most overlooked royals. Women of strength, substance, and significance, Marguerite and Eleanor are heroines of the best sort – devoted and dutiful, and above all, true to themselves and each other. Sophie Perinot has given us a well-dressed window into the past through which the view is sweeping, vivid, and poignant. Carefully researched and artfully written, this novel is a triumphant debut.

One of my resolutions for 2012 was to start posting reviews of books (other than mine) that I think are noteworthy. Once a month, I will post a new reading recommendation. We begin this month, with Teresa Frohock’s deserving debut, Miserere – An Autumn Tale.

An impressive first work by a talented author, this book was a compelling read. A well-imagined parallel reality provides an intriguing setting for the unfolding of potentially earth-ending events and a powerful quest. Teresa Frohock skillfully intertwines deeply spiritual themes (which could have easily become heavy-handed religious diatribe, but didn’t) into an action-packed yet emotional adventure that delivers a highly entertaining experience for the reader. 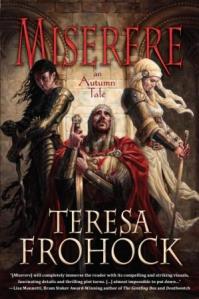 The focus of the story is the soul-tortured hero Lucian, who frankly was the reason I couldn’t put this book down. Lucian’s journey toward forgiveness through reflection and painful self-discovery brought me to tears more than once. Lucian, more than any other character in the book, is so well drawn that he almost rises to walk across the pages. Equally as heart-tugging is the foundling, Lindsay, who becomes the catalyst for Lucian’s redemption. Rachael, the maligned object of Lucian’s desire, faces her own inner demons — literally and figuratively — with grace and courage that makes her both lovable and memorable. Add the evil dominatrix Catarina and you have the makings of a classic heroic journey set against an innovative (and also darkly dramatic) backdrop.

That said, I came away at the end of the book feeling like I had read an abridged version, which I suspect could be due to deep cuts and edits designed to meet a publisher’s page count. The result, whatever the reason, is the lingering feeling of having just scratched the surface of a deeper story.  Another 50 pages would have allowed for richer detail and deeper development of the secondary characters (especially love interest Rachel, and twin sister Catarina–the primary antagonist).

This is one of those very rare books where the editor in me was actually begging for MORE back story. The ending, though maybe rushed, a bit predictable and too sweet in the wake of the visceral punch of the rest of the book, did leave me wanting more. The artful world building and intriguing cast of characters are full of potential which I can only hope will result in a long-lived series. I look forward to whatever comes next from this author.

Next Month: Song of the Nile & Lily of the Nile (Novels of Cleopatra’s Daughter) by Stephanie Dray .