I met the fearless and talented Tara Bennett years ago when I was working as a publicist and she had just established herself as a force to be reckoned with in the entertainment media. One of the most generous professionals I have ever met, Tara is not only a respected and valued colleague, she is one of my favorite peeps.

This has been a big year for my gal pal Tara, and it is so well-deserved. Success is not a random happening. Building a career in our business takes talent, persistence, and a helluva lot of hard work.

Many of you may already be familiar with her books and features. In addition to her work as a regular and prolific contributor to a bunch of major online and print publications, she is also the author or co-author of several movie and TV companion titles including The Lost Encyclopedia, The Art of 300, The Art of Terminator Salvation and 24: The Official Companion Guide: Seasons 1 through 6.

Today I’m having a little celebration in honor of her latest accomplishments. Great gift ideas for friends and family –

Just Released: THE ART OF “EPIC” (the motion picture) 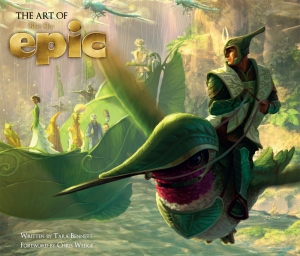 From 20th Century Fox Animation and Blue Sky Studios, the creators of Ice Age and Rio, Epic tells the story of an ongoing battle deep in the forest between the forces of good and the forces of evil.

When a teenage girl finds herself magically transported into this secret universe, she must band together with a rag-tag team of fun and whimsical characters in order to save their world — and ours.

The Art of Epic shines a light on the previously hidden world of Epic, with over 300 pieces of concept art, character sketches, storyboards and digital paintings, along with interviews with the key animation talent.

Delve into television’s most otherworldly phenomenon! Fringe: September’s Notebook is a uniquely in-world collection that explores the intricate destinies of Walter Bishop, Peter Bishop, and Olivia Dunham. Gathered by the Observer known only as “September,” these pages reveal new truths about the Fringe Division and Massive Dynamic. The book also closely examines the Amber timeline and the alternate universe “Over There.”

Packed with concept art, exclusive photos, and intriguing ephemera, September’s Notebook will satisfy every serious fan’s hunger for details about the Observers, quirks and little-known facts about each character, insight into Fringe Science, and much more. “Easter eggs” throughout build on the many symbols and codes woven into the show’s fabric, uncovering truths never before revealed.

With its layered storytelling, well-rendered characters, and complex overarching narrative, Fringe is the ideal show around which to publish, and Fringe: September’s Notebook provides a totally immersive reading experience.

Tara Bennett has written literally hundreds of interviews and features for SpecFic genre and other entertainment publications as well as authored or co-authored more than a half-dozen film and television series companion books.

Before starting her journalism career, Tara worked for almost a decade as a television producer on the east coast for outlets such as CN8 and Comcast. She then used her expertise to transition into writing full-time about the industry with a focus on scripted dramas and genre-related films.

Tara is also an adjunct professor at Rowan University in New Jersey, teaching Film and Television studies. As part of her curriculum, Bennett utilizes programs such as LOST and 24 to teach her students how to write for television.

Want to know more about Tara? Then clickety-click right here.

Right off, let me first acknowledge that this installment of Marketing Monday is two weeks and a day late. My apologies, especially to those of you who are following this blog. Occasionally other demands on my time get in the way of keeping on schedule, but please know that I do make every effort to post here every week.

I’ve been thinking a lot about creative community lately, and why I believe a commitment to it should be a core value for all artists, especially writers. We all need the support and encouragement of others who think and feel the way we do- for creative support, for business information, but also to experience a sense of  belonging.

Another benefit to seeking out and participating with groups of like-minded people are the opportunities this kind of networking creates for marketing. I’m thrilled to see grassroots projects popping up all over the place – from group blogs to indie-author information sharing sites, topical message boards, crowd-sourcing, and more.

In my opinion co-op marketing is just plain smart and practical. It makes sense, it feels good, and when done right, it is powerful. The combined efforts of the group exponentially broaden each participating author’s reach while simultaneously lightening the burden on the individual. The whole is greater than the sum of the parts, as they say.

I first noticed this happening in the world of romance writers and historical fiction authors, and now see it trending everywhere. Authors helping other authors and thereby helping themselves. And let us not overlook the charity drives, public awareness campaigns, fundraising, and the general spreading of good will. Love it. LOVE it.

I’m going to spend the rest of this post giving a shout out to a few of the SFF authors I support, cuz, like, you know, these are my peeps. But these particular folks are also committed to community building and shared marketing, and doing it particularly well.

But first, one recommendation for co-op marketing that you might not have heard about. If you aren’t familiar with or using Triberr, take a look. Awesome tool. Really.

This week one of my favorite fantasy authors Teresa Frohock is touting the launch of a genre / publisher specific collective author site designed to promote and support its members and their books. The kick-off includes an innovative giveaway. SFF fans should check out Booksworn (click here) for some of the most interesting new voices in fantasy fiction from Nightshade Books. Also, if you haven’t read Teresa’s debut dark fantasy MISERERE, I highly suggest that you check that out too! Click on the book cover art to be taken to the Amazon book page.

Last week I had the privilege and the pleasure of attending a local signing by one of my literary heroes – Terry Brooks. Terry was sharing the spotlight with the well-known fantasy artist Todd Lockwood, and his web druid turned author / publisher Shawn Speakman. Shawn, who has been managing Terry’s website and other marketing for years, is a cancer survivor facing mountains of treatment related debt. In an effort to dig out from under, his imprint Grim Oak Press is releasing a fabulous short story anthology featuring the work of some of the best voices in fantasy fiction – including Terry Brooks, Patrick Rothfuss, Jacqueline Carey, R.A. Salvatore, Naomi Novik and many more. To pre-order UNFETTERED, click here.

And last, a special shout out to colleague and friend, entertainment writer Tara Bennett, who is an A-lister when it comes to networking and mutual marketing. Her latest endeavor, FRINGE: September’s Notebook (the authorized companion guide to the TV series) was released last week. If you are a Fringe fan, you can get the book here .