It wasn’t until the book was in print that I realized that my heroine is a bit of a lush. Alwen, the noble and determined sorceress at the center of THE WELL OF TEARS, has a tendency to turn to a particular medicinal concoction in times of great stress. And sorrow. And celebration. And worship. And when entertaining. And, well, pretty much every time anything at all happens in her world.

THE WELL OF TEARS is set in early 10th century Wales, and centers on the rise to power of a medieval king whose legacy has persisted to modern day.  As was true of  the ancient agrarian based religions of the time, food and drink are essential elements in both social tradition and spiritual practice in my novel. 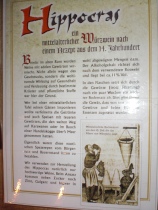 Historically speaking, the ritual consumption of ales and wines at all sorts of occasions is well documented. This is especially true in observing important seasonal events. Mulled wines and spiced ales have been on the holiday menu for centuries. References to celebratory spirits such as pimen and hippocras date to the early days of the Roman Empire, often also attributed with medicinal and aphrodisiacal properties.

Although pagan traditions in Britain began to disappear or become absorbed into Christian practice after the 3rd century, recipes for ritual beverages continued to appear in descriptions of ancient rites through the Dark Ages and beyond. Spirits have also long been noted as recommended treatment for everyday ailments from the common cold to gout and depression. A nip now and then has been a part of the human experience since the beginning of recorded history.

Early mentions of aleberry (ale + bree [broth]) in my research, a domestic remedy for cold or flu, were so intriguing to me that I made the brew the favorite guilty pleasure of my heroine.

Including this drink in a story taking place in the early 10th century seemed appropriate, but a true and historically accurate recipe for the drink has never been discovered. Known to have been made by boiling ale with nutmeg, cinnamon, sugar and bread sops, strained and then drunk hot, aleberry is not unlike other beverages referred to in Medieval texts. So, to be as authentic as I could, I decided to ’borrow’ a recipe from a similar beverage that still is used today.

Lamb’s Wool is ale mulled with spices and sugar mixed with the pulp of roasted apples. The fruity pulp creates a lumpy froth that is said to resemble the wool of a lamb. A traditional beverage still today enjoyed on Halloween, Christmas Eve and Twelfth Night, Lamb’s

Wool was first a pagan ritual beverage used for ‘apple howling’ or wassailing.

In the ceremonial blessing of the orchard, which occurred during the winter solstice, the drink was poured on the ground and on the trunks of trees to awaken the first stirrings of life in the land and chase away evils spirits. Thus, the next season’s bountiful harvest was ensured. The ritual pouring took place amidst the chant of ‘waes hael’, (OE., ‘be well’ or ‘good health‘)–today recognized as wassail.

Below is a contemporary, Americanized version of a more traditional Old English recipe that is quick and easy to make. If you’d like to try your hand at the more authentic old-world brew, click here:  http://recipewise.co.uk/lambswool

Preheat oven to 350 degrees. In a casserole dish, bake apples and butter for 30 minutes, or until the apples are soft. Then, in a large saucepan, combine the roasted apples, beer, brown sugar and spices. Heat until hot, and serve (unstrained) in large mugs. 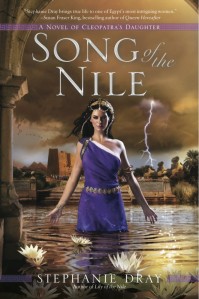 An earlier version of this article appeared last year on the blog of celebrated historical author Stephanie Dray.  Stephanie’s novels LILY OF THE NILE and SONG OF THE NILE are tales of Cleopatra’s daughter Selene. She has recently completed the third and final installment in the series. You can learn more about Stephanie, Selene and the Roman era at http://www.stephaniedray.com

Yes, I confess. I was a pounding heartbeat away from committing the unforgivable sin – posting a comment in response to a bad (and grossly inaccurate) characterization of my book. I actually went so far as to type out a lengthy diatribe politely detailing counterpoints (i.e. justifications) for what the reviewer presumed to be historical inaccuracies and omissions, with annotations indicating my historical sources, no less.

Just before I hit “post comment”, my better judgment stepped in (thank the gods) and reminded me of the advice I have always given to other writers. A book review, good or bad, is the reviewer’s legitimate opinion. It is based on their personal experience with your book, and on their individual expectations of the story. If your book doesn’t live up to those expectations, the reviewer has every right to express that dissatisfaction. The reviewer is not wrong.

However, in some cases, a reviewer’s knowledge base is – wrong, that is – which can lead them to make some erroneous presumptions and conclusions about your work that they then publish to the world in well-respected genre publications. This can be frustrating, and even insulting – especially for an author who prides herself on the exhaustive research she did in fact do.

In this case, the reviewer in question admittedly did not finish the book, but still felt entirely comfortable writing a review challenging the historical context of the entire story – based on what could only have been the first 50 or so pages. The review goes on to accuse the author (me) of doing my research at the local renaissance faire. Heh. A bit snarky, wouldn’t you say? Especially since her opinion is based on what appears to be a romanticized (and not very accurate) understanding of the period and place (10th century Wales).

The reviewer in question takes issue with two specific points – Vikings and Druids. Let’s start with the Vikings, of which there are none in my book (at least not the marauding kind) – something the reviewer correctly points out.

Really, you say? No Viking horde in THE WELL OF TEARS? Yes, I know. Crazy talk. Everyone knows the Vikings were raping and

pillaging all over the place in 10th century Britain. Right?

Yeah, not so much. By 950 AD, the last of the Viking rulers had essentially been expelled, conquered or killed by Alfred of Wessex and his successors. The remaining Scandinavian invaders had for the most part become settlers, and eventually were subsumed under British rule. The repelling of Viking incursions had been going on for quite some time and by the turn of the first millennium (900-910 AD) the Saxons had handily defeated the Danes in several major battles and regained control of the larger kingdoms. With the exception of Erik Bloodaxe in Northumbria, the days of the Viking marauders overrunning the entirety of Britain were over – especially in Mercia & Wessex. You might want to read THE VIKINGS by Else Rosedahl, dear reviewer. It was very helpful in the researching of this book. I also highly recommend THE LAST APOCALYPSE by by James Reston, Jr. – another insightful resource.

Interestingly enough, THE WELL OF TEARS takes place in the Welsh provinces (circa 905 AD), which were never fully invaded by Vikings or subject to Danish rule. Hywel ap Cadell, who is the king at the center of THE WELL OF TEARS was successful in protecting his borders (which were never even threatened by raiders) by seeking an alliance with the British kings Edward and Athelstan. Edward and Athelstan, and Alfred the Great before them, contained the Danelaw to Northumbria and northeastern Mercia – which essentially protected Wales from the worst of the incursions.

Contrary to popular belief, the North Sea was not teeming with Viking longships at this time, and it is more than possible (even probable) that the crossing of the narrow channel between the Frisian isles and the southeastern shore of Britain undertaken by Aslak and Alwen in the early chapters of THE WELL OF TEARS would have taken place without encountering invading Norse fleets. I will concede that the likelihood of coming face to face with bands of raiding Viking horseman while passing through Mercia was pretty high – however, my travelers were already hiding from other sinister forces and could have easily made their journey without facing the horde.

Now for the Druids. What, no DRUIDS? Yes, I know – absolutely heretical. But it’s true. Aside from a generic reference to a title (Ard Druidh, which is Old Welsh for “first priest/druid”) there are NO DRUIDS in my book. Another historical misstep, you say?

Well, here’s the thing. The druids and most pagan practices were long gone from the British Isles by the 10th century – the Romans

did a pretty good job of eradicating them about 500 years earlier. And, what little ACTUAL HISTORY that is documented relies largely on anti-Celtic propaganda written by Roman-era scholars. “One person’s Druid is another person’s fantasy” – well said, Peter Berresford Ellis. Ellis’ book THE DRUIDS is a particularly good source on this subject. I suggest you read it, dear reviewer. And, not for nothing, Druidism was also predominantly an Irish (and possibly Scottish/Gaelic) cultural phenomenon – not so much Welsh. Did I mention my book is set in 10th century Wales?

And while we are on the subject, let me be clear so as not to mislead anyone – there is no depiction of druidism or any specific practice of what is commonly considered Celtic paganism in my book. The spiritualism in THE WELL OF TEARS is an amalgamation of the many agrarian-based beliefs that persisted in the Brythionic (not Gaelic) cultures. The magic system in the book is entirely fabricated, albeit loosely based on general pagan practices, as is the magical order of sorcerers I named the Stewards. That was an intentional (and educated) world-building decision on my part.

THE WELL OF TEARS is an epic fantasy based in historical context – a context, which I have stated before, is largely without documentation. The history of Cornwall and Wales in the 9th and 10th centuries is generally without verifiable record. Very few documents from that era have survived, and those that have are conflicting – as are the prevailing scholarly opinions.

In creating the world of the Stewards, I drew from a compilation of research on the cultural and mythological truths of the time using the best sources available. If you are looking for an in-depth historical account of Wales in the 10th century, you won’t find it in this book. The truth is, you are going to have a tough time finding any definitive record anywhere. And, if you are looking for a historical fantasy recounting tales of Druids as popularized in contemporary Wiccan philosphy, this book is sure to disappoint. Instead, I explore the concept of paganism (which is quite literally a generic term that refers to all polytheistic and/or indigenous religions) in a much broader sense.

Which brings me to the point that all historical fiction is a blending of fact and fantasy.  This is especially true of historical fantasy. Novels in this sub-genre are by definition a re-working of what is known (or widely believed) to fit a particular author’s creative vision. History, like everything else, is subject to interpretation. Whether or not it rings true for you depends upon the sources from which your own knowledge is gleaned – it just might be that your sources are different than mine. That’s ok. Heck, even the scholars agree to disagree.

Naturally I hope what I have written will entertain and enlighten you. However, if it doesn’t, and you feel compelled to complain about it in a review, feel free. You have my sincere gratitude for having given my book a try. But before you get all high-minded and start casting aspersions on the accuracy of the history within, be sure you’ve done your own research. I can help with that – I’ve got a great bibliography, if you’re interested :).